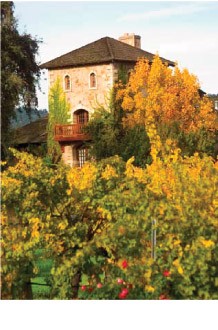 There are 16 different appellations in the Napa Valley…distinctive soil, altitude, and weather conditions make each of these unique to each other.

Atlas Peak AVA
Climate: Cool, mountain-influenced, with temperatures about 10 to 15°F cooler than the Valley floor in summer. Above the fog line, there is a low diurnal change, with summer temperatures rarely above 90°F (30°). Elevation: 760 to 2600 ft (231m to 792m). Rainfall: 38 inches (96 cm) annually. Soils: Volcanic in origin, with basaltic red color, shallow with limited water retention, so irrigation is often essential.

Calistoga AVA
Climate: Warm to hot, depending upon time of year; lower humidity; summer temperatures peak to 90°F (32.2°C) and fall to low 50s°F (11°C), the result of marine air from the northwest; cool afternoon and evening breezes
Elevation: 300 to 1200 ft (92 to 370m)
Rainfall: 38 to 60 inches (96.5 to 150cm) annually
Soils: Almost completely of volcanic origin, soils range from rocky, stony loam on the hillsides, to gravelly or cobbly loams on the alluvial fans, to heavier clay-silt soils in the valley center areas

Chiles Valley District AVA
Climate: Fairly warmer summer days (mid-80°F plus), but due to higher elevation and summer fog at night, quite chilly at night (below 50°F). With colder winters and spring, as well as strong winds, harvest comes later than on valley floor at Oakville. Elevation: 800 to 1300 ft. (242 to 394m). Rainfall: 35 inches (88cm) annually. Soils: On the valley floor, primarily alluvial soils with silty-clay composition of marine origin, with good fertility. Hillsides show more clay-loam and stony-clay composition, mostly marine in origin, with some volcanic outcropping, and less fertility.

Climate: Coombsville weather is moderated by its proximity to the San Pablo Bay.  Frosts are mitigated, fog covers settle more frequently and burn off later in the day than our neighbors to the North. The vines bud early and the grapes tend to be harvested later, making for a long, slow ripening period. Daily average high temperatures can be as much as ten degrees cooler during the hot months than most other appellations, and heatspikes tend to be less severe. All of this limits dehydration, preserves acidity levels, and generally aids even ripening patterns.

Principal varieties & characteristics:Coombsville vintners' production mirrors that of Napa Valley at large, with a focus on Cabernet Sauvignon and other Bordelais varietals. Due to its varied soil types and the numerous meso-climates spread throughout its rolling landscape, excellent examples of Syrah, Chardonnay, and Pinot Noir are also produced. Coombsville wines can be recognized by their typically soft but significant tannins, which provide excellent structure and mouthfeel, along with underlying layers of earth and mineral flavors. They are quite often approachable yet sophisticated and layered and not at all simplistic.

Los Carneros AVA
Climate: Cool, with prevailing marine winds from the San Pablo Bay and through the Petaluma Gap to the west. High temperatures during summer rarely exceed 80°F (27°C) with less diurnal range variation. Elevation: 15 to 400 ft. (4.6 to124 m) Rainfall: Lowest in Napa Valley: 18 to 24 inches (7.2 to 9.6 cm) annually. Soils: Clay dominated, very shallow in general, with more loam and hillside alluvials in the northern section. Yields typically are restrained by the hard claypan subsoil, which prevents deep-rooting.

Mount Veeder AVA
Climate: Cool to moderate, with most vineyards above the fog-line, meaning warmer nights and cooler days and less diurnal range than the valley floor. Typical mid-summer high temperatures about 85°F (30°C). Elevation: 600 to 2100 ft. (183 to 650m). Rainfall: 35 inches (87.5cm) annually. Soils: Sedimentary based, former seabed, shallow and generally well drained, as well as more acidic, with low fertility. Most have a sandy or sandy-loam texture.

Oakville AVA
Climate: Moderately warm, with temperatures commonly in the mid-90°F range in high summer, but also still strongly affected by night and early morning fog which helps keep acidity levels good. East side of the AVA receives more of warmer afternoon sun. Elevation: 75 to 500 ft (23 to 150m). Rainfall: 35 inches (87.5 cm) annually. Soils: Primarily sedimentary gravelly alluvial loams on the western side, with more volcanic but heavier soils on the eastern side. Low to moderate fertility and fairly deep, with average water retention.

St. Helena AVA
Climate: Warm, due to greater protection from western hills, with less fog or wind incursions. The narrowing of the valley floor provides more heat reflection off the hillsides. Mid-summer temperature peak is often in the mid- to high 90°F range (31 to 35°C). Elevation: 150 to 600 ft. (46 to 185m). Rainfall: 38 to 40 inches (95 to 100cm) annually. Soils: South and west borders are more sedimentary, gravel-clay soils, with lower fertility and moderate water retention. Further north and to the east soils are prevalently volcanic in origin and are deeper and more fertile.

Stags Leap District AVA
Climate: Moderately warm, with afternoon marine winds acting as an 'air-conditioner' to cool the warmer air radiating off the bare rocks of Stags leap itself and the surrounding hillsides. This AVA is often up to 10& deg;F warmer than in Yountville AVA. Mid-summer temperatures can reach 100°F, but more regularly are in mid-90 range (32-34°C). Elevation: 66 to 400 ft. (20 to 123 m). Rainfall: 30 inches (75cm) annually. Soils: Volcanic gravel-loams on the floor of the valley, with rocky hillsides, and low to moderate fertility due to hard clay bedrock subsoils 2 to 6 feet down.

Wild Horse Valley AVA
Climate: A warmer area well to the east of Napa Valley proper, but still moderated by both altitude and prevailing winds coming off Suisun Bay to the Southeast. Elevation: Wild Horse Valley 400 to 1500 ft. (123 to 460 m). Rainfall: 35 inches (94 cm) annually. Soils: Volcanic in origin, with basaltic red color, shallow with limited water retention, so irrigation is often essential.